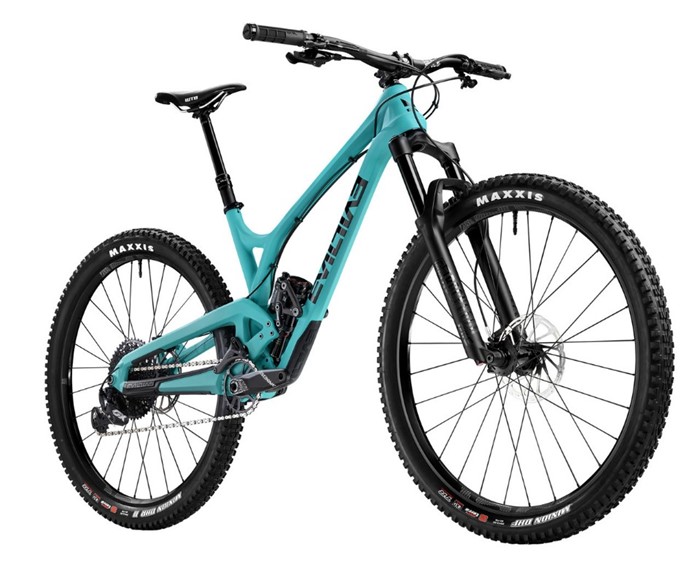 THE OFFERING OF ADVENTURE The Offering is the 140mm travel 29er that has a taste for adventure and everything you need to crush epic all-day trail missions, slash berms, and send every jump line you can find. The steeper seat angle encourages you to attack the climbs while any of our trunnion mounted shock options means no downhill is safe. The Offering is complete with more tire clearance, chain clearance, lower shock mount drain and the return of a black frame option make us very excited to release this into your fine Evil hands. Taking the best attributes from both the Following MB and the Wreckoning LB, while developing its own character, the Offering provides a new experience with longer reach while creating a bike that has all the same pop with an increase in stability without sacrificing corner destroying performance.

The number 74.8° has been the seat angle that has spanned our entire bike line up. When paired with the appropriate travel front fork, 74.8° was a very pedal friendly seat angle. Many of you wanted to ride longer travel front forks and when combined with the lower (X-LOW) of our geometry settings, it slackened the cockpit and reduced the climbing ability that we initially designed into the bikes. With the Offering, we steepened the seat angle 2.2° which lengthened the reach 25mm, putting the medium Offering at a 77° seat angle with a 461mm reach, while increasing front to center by 14mm from 759mm to 773mm over a Wreckoning. We have effectively made the medium Offering use a 7mm longer reach than the large Wreckoning while having a similar front to center. What does this all mean for you the rider? It means that the Offering has all the same poppertunities and corner shredability that Evil bikes are known for with an increase in stability and climbing ability. That’s great, a bike that climbs you say? But how does it handle? Glad you asked. With the seat angle out of the way, we moved onto the bikes handling characteristics. As most of you Evil riders would know the core of the Evil DNA is our love of slashing turns, monster-trucking rock gardens and sending every side hit we can. The Offering keeps this dream alive with a few important tweaks that resulted in a feeling of increased stability at speed, increased traction in the rough and the ability to brake later into turns… even at race pace. For those of you looking for a more traditional, snappy feel, both 43mm and 44mm offset forks also work well. We could have called this the Variable Offset Option but at Evil we have created drinking games based on over-used bike industry acronyms and terms like optimized which we used in the first sentence above, capable, confidence inspiring, and advanced.